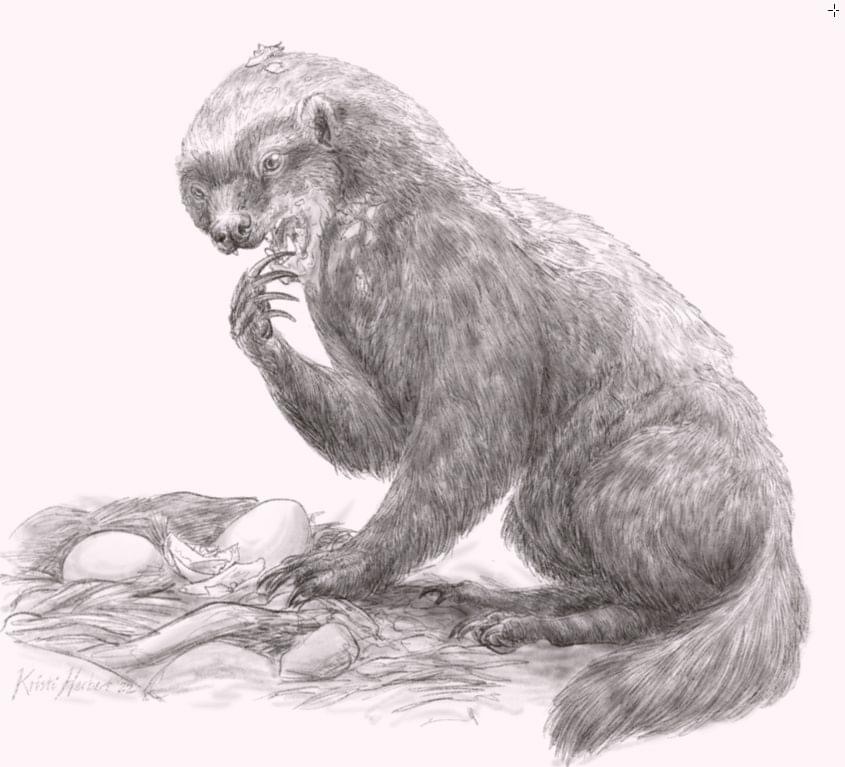 This is spoilery for the appendix of the forthcoming Temple of Twins. Read at your own risk!

In September, Berra says to me: “But can we make up about a dozen interesting Praxian things?” This is the point at which I began to cackle gleefully. Or thereabouts anyway. After tossing around various ideas (some of which have made it into the Temple of Twins, I blurted: “Badger! We need a badger encounter! Honey badger. About to disturb a hive of killer bees. Or just did so. Bees can’t get it, but there are these humans nearby to take out their rage on.” And thus began the joyous creation of the Praxian purse badger. Below are snippets of text that I threw at Berra as I researched and made an effort to reskin something that is pretty terrifying as is.

They will kill you

My first important point and what influenced the name:

“One method Honey Badgers use when attacking larger prey is to castrate them and then wait for the animal to weaken from bleeding.”

Me to her: “Honey badgers can basically skunk larger enemies too. So, they could startle a honey badger and get stinkified. He may even be vindictive enough to follow them.”1Berra sadly remarked, “I don’t think we have room to put the skunk bit in…”

Do they need armour?

We had a brief discussion about whether or not to armour them like a pangolin. After briefly entertaining the idea, I decided they really didn’t need it. “They have armour already. Have you seen the stats on how thick their skin is? But I am amused by the pangolin idea, so sure! No wait… part of what makes honey badgers cool is their terrifying flexibility. There is no safe place to hold them. Put armour on that and we change them fundamentally.”

Their skin is about 2.5 cm thick and can protect them from stone arrowheads and spears. Perfect for Prax. Apparently, a machete can’t even cut all the way through.2Hiskey 2011 The World’s Most Fearless Creature is the Honey Badger The skin is also loose, making it difficult for anything to get a grip on them. No matter where you try to hold one, it can likely still reach you.3Hiskey 2011; Carter et al. 2017)

After I wrote excitedly for a bit, Berra tried to change the subject. But my teeth were in it.

Her: “Then let’s just write them up properly, and maybe give them a mottled colour so you do not spot them coming. A sage, meditating on a seat made of woven grasses. He will answer a question if you can give him water, but when you try the seat sways away.”

Me: “They are freaky smart too. They like tolerate humans because humans will summon them to find the honey, then the humans deal with the bees and always leave leftover honey for the honey badgers.”

And so it went for a few days. Not everything I obsessed over made it into the book. It’s a random encounter, not an chapter. But… oh, it was fun. I mean, I knew that honey badgers were resistant to snake venom, for example (there was that brilliant viral YouTube video), but I didn’t know it’s a trait shared with a select few mammals.4Drabeck et al. 2015 Oh! And honey badgers do prey on other carnivores – mostly small and medium ones because they may be tenacious killers, but they aren’t dumb.5Begg et al. 2022

The Praxian purse badger is just as badass as its Earth-based parallel. Or so I think, anyway. I might be biased.